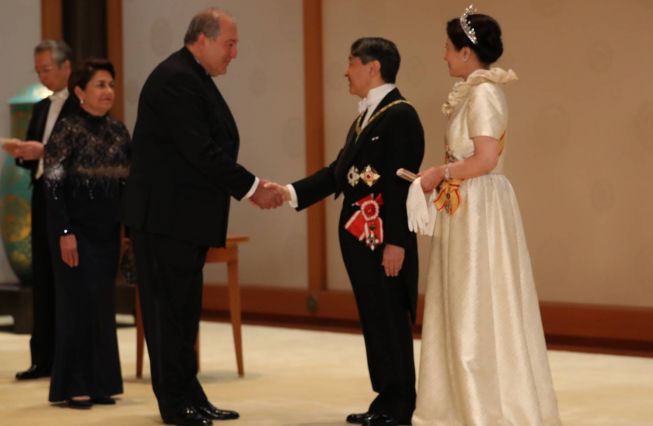 Japan celebrates His Majesty the Emperor's Birthday. On this occasion congratulatory messages have been sent by the top officials of the Republic of Armenia.

"I extend my heartfelt congratulations to You and to the friendly people of Japan on the occasion of Japan’s National Holiday. I recall with warmth the remarkable ceremony of Your Majesty’s enthronement in Tokyo, in 2019. It was a memorable event that once again reaffirmed the sincere eagerness to develop the cooperation between Armenia and Japan", said H.E. Mr. Armen Sarkissian, the President of Armenia, in his message addressed to His Majesty the Emperor of Japan.

H.E. Mr. Nikol Pashinyan, the Prime Minister of Armenia, addressing his colleague H.E. Mr. Suga Yoshihide, congratulated him on the occasion of National Holiday and stressed the following: "Allow me to express my gratitude for the healthcare and economic support provided by the Government of Japan, as well as the humanitarian aid allocated for the people of Nagorno Karabakh. I am confident that, overcoming the intricacies of the COVID-19 pandemic, the friendly people of Japan will continue their firm course towards building a harmonious society."

H.E. Mr. Tigran Avinyan, the Deputy Prime Minister of Armenia, published a congratulatory message addressed to H.E. Mr. Yamada Jun, the Ambassador of Japan to Armenia, in which he particularly emphasized the humanitarian ties between Armenian and Japanese people. "The history of our nations has also shown manifestations of mutual support and humanitarianism, which have laid a solid foundation for the close Armenian-Japanese people-to-people ties. One such episode was the fact of the rescue of local Armenians by the Japanese ship "Tokei Maru" in Smyrna, 1922, which has been preserved in the grateful memories among the descendants of the survivors", said H.E. Mr. Avinyan in his message.

"Please accept my heartfelt congratulations on the occasion of National Holiday of Japan - His Majesty the Emperor's Birthday. Armenia highly values the humanitarian aid provided by the Japanese Government to address the crisis in Artsakh that has evolved as a result of the Azerbaijani-Turkish aggression. We look forward to strengthening and expanding our bilateral agenda with Japan through constructive dialogue in the years ahead", mentioned H.E. Mr. Ara Aivazian, the Minister of Foreign Affairs of Armenia, in his message addressed to his colleague H.E. Mr. Motegi Toshimitsu.

Congratulatory messages have also been sent by H.E. Mr. Ararat Mirzoyan, the President of the National Assembly of Armenia, as well as by the Armenia-Japan Parliamentary Friendship group.

The Embassy of the Republic of Armenia to Japan joins in the congratulations and would like to convey its best wishes to His Majesty and to the friendly people of Japan.