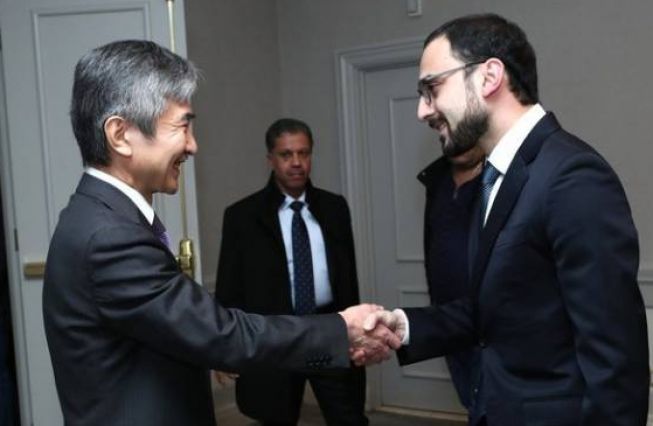 Please accept my warm congratulations on the occasion of the National Day of Japan – the Birthday of His Majesty the Emperor of Japan.

I am glad to note that during the twenty-nine years of diplomatic relations between Armenia and Japan close friendly cooperation and mutual understanding have evolved between our people and countries through our joint work. The governments of our countries have made considerable effort to development Armenian-Japanese partnership.

Armenia attaches great importance to the further development and strengthening of friendly relations and cooperation with Japan, with the view of Japan’s contribution to the promotion of peace, democratic institutions, disaster prevention and environmental capacity development agenda in our region and in the world, as well as in providing assistance to developing countries.

Armenia signifies the Japanese involvement with the South Caucasus and appreciates Japan's balanced position and support for an exclusively peaceful settlement of the Nagorno-Karabakh conflict within the framework OSCE Minsk Group Co-Chairmanship. In this regard, the decision of the Japanese government to provide humanitarian aid of 3.6 million USD for those affected by war unleashed against Artsakh is highly appreciated.

Japan has proven through its historical experience that the best way to overcome the aftermath of wars is to establish lasting peace and develop human resources and capabilities. It should be noted that Armenia shares with Japan such common values and principles as democracy, social, freedom and dignity, which are an additional impetus for cooperation between our countries and peoples.

The history of our nations has also shown manifestations of mutual support and humanitarianism, which have laid a solid foundation for the close Armenian-Japanese people-to-people ties. One such episode was the fact of the rescue of local Armenians by the Japanese ship "Tokei Maru" in Smyrna, 1922, which has been preserved in the grateful memories among the descendants of the survivors.

Armenia and Japan cooperate effectively on the issues of mutual concern at international organizations. Armenia supports Japan in the UN and other international organizations and values Japan's role in responding to global challenges and in advancing the sustainable development agenda. In this regard, we appreciate Japan's responsible approach of serving as a "bridge" between developed and developing countries and diverse cultures.

Undoubtedly, all these programs are of great assistance for Armenia on the course of economic reforms. In terms of official development aid, Japan is one of the largest donor countries in the world, as well as for Armenia. Over the years, the official assistance for development, provided by the Government of Japan has contributed to the advancement of numerous spheres such as emergency situations, energy, transport, small and medium-sized businesses, culture and to the boost of human resource, infrastructure and capacities development in many other areas in our country. At the same time, we see greater potential for the growth of economic ties and cooperation in various fields.

I would like to once again congratulate our Japanese friends on the occasion of the National Day and express my gratitude to Ambassador Yamada for his significant contribution to the strengthening of the Armenian-Japanese relations.

Long live the friendship between Armenia and Japan!